Celebrating a dedication to excellence, innovation, and exceptional customer service 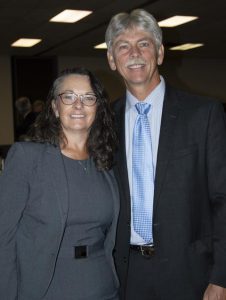 What began as a basement start-up for co-founders Connie and Jeff Sawdey, is now an over 350- person corporate business with accolades and achievements expanding their global footprint full tilt. Jeff Sawdey recalls the day Connie came home from work frustrated and confused after being overlooked for a well-deserved promotion and underpaid compared to her male counterparts. Instead of advising her to stick it out or suck it up, Jeff bravely told Connie, “let’s start our own company and run it better”, vowing that their business would treat all employees fairly regardless of race, gender, class, or creed.  From that day and the days forward, a seed was planted, and from it, many new cutting-edge ideas were born. The two were purposeful in their next steps to create a productive and progressive work culture.

Sawdey Solution Services was incorporated in April 2001 and Connie quit her job 5-months later. To be here now is no easy feat. The Sawdeys recount moments when customers and competitors were not sold on their sustainability and in response, made many sacrifices to prove their capabilities in the industry. Through determination and strategic planning, they prevailed, and now have existing relationships with hundreds of government agencies. Connie was once asked how big she thought the company would grow, and she said, “30-40 people would be nice.” Today, that number has multiplied by the dozens. The dynamic duo attributes much of their aptitude to their military careers. Where one excelled as a Battalion Commander leading teams, the other served as a Warrant Officer tasked with applying expert solutions to complex problems. Their past endeavors made becoming entrepreneurs a prudent transition. In the many years since inception, Sawdey Solution Services has celebrated numerous achievements and announced major successes for their growing business, but also learned several lessons along the way. To this day, the Sawdeys often look at each other amazed at how far they’ve come.

At the end of 2020, Connie and Jeff announced their plans to transition leadership and establish new roles effective January 1st, 2021. They promoted Joseph Portera to President of Sawdey Solution Services and promoted three others to Corporate Officer roles. These promotions include Beth Czanik as Chief Operating Officer, Nathan Schneider as a Corporate Officer (added to his current role as Chief Financial Officer), and Chris Sawdey as Facility Security Officer. A little about the new Sawdey Corporate Officers:

Joe Portera started with Sawdey in 2011 as an Earned Value Management (EVM) and acquisition lead supporting the Business Transformation Agency. During his time with Sawdey he has performed in various roles throughout the organization supporting both operations and business development functions. During his tenure as an Executive Director, he helped to grow the company in an organic manner utilizing existing relationships and expanding the Sawdey footprint with established customers. Most recently Joe led the business development team at Sawdey as a Vice President of Operations and Development and helped with the transition from a small business to a large business in the FedCon arena. Joe resides just outside of Annapolis, Maryland in Gambrills with his wife, Lucy, their two children, Hudson and Blake, and their dog, Gatsby.

Beth Czanik started with Sawdey Solution Services as a Systems Engineer on an AFMC/A6 task in 2007 and brought with her some great Information Technology and Content Management experience.  For several years she provided training support of the AF Portal before moving on to the Corporate Staff in 2012.  She has served in progressively more complex Operational and Business Development leadership positions since that time.  Most recently as Vice President of Operations and Development and was instrumental in securing awards first under the OASIS SB followed more recently by the Unrestricted award in 2020.

Nathan Schneider started with Sawdey Solution Services in 2009 as a Budget Analyst supporting HQ AFMC. During his tenure with Sawdey, he has held several financial leadership roles within the corporate staff. He assumed the role as Chief Financial Officer in June of 2018 and manages a team of 7 resources. Nathan is a graduate of The Ohio State University and resides in Centerville, Ohio with his wife and 3 children.

Chris Sawdey started with the company in 2014 as a Cybersecurity Specialist supporting the corporate office. During his tenure he has performed various roles throughout the organization including subcontract management, billing, and assistant facility security officer. Most recently Chris served as the IT & Security Manager responsible for maintaining and upgrading the company network. Chris currently resides outside of Joint Base Lewis-McChord, Washington with his beautiful wife Jocelyn and their dog, Shorty.

The moments and memories leading up to this milestone are sentimental reminders of the hard work, dedication, and vital contributions made from so many to steer the company thus far. In reflection of those memories, the company has begun a campaign on social media under the hashtag, ‘Sawdey moments’ where pivotal turning points along their timeline were conceived. To commemorate the occasion, an event will be held in early September 10th, 2021 to celebrate the Anniversary. The company plans to invite employees past and present, industry stakeholders, and family and friends as a thank you for their continued support.